Ed Schultz To Bill Maher: I Would Donate To Obama If MSNBC Let Me, ‘Damn Right I Would’
video

Ed Schultz To Bill Maher: I Would Donate To Obama If MSNBC Let Me, ‘Damn Right I Would’ 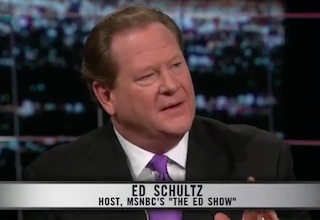 MSNBC’s Ed Schultz spoke with Real Time‘s Bill Maher Friday night and lamented that he could not give a donation to President Obama‘s reelection campaign or even his Super PAC under his network’s rules.

“He’s going this way, Bill, because he has to,” Schultz explained. “Because of Citizen’s United he’s not going to be able to raise the kind of money that they are going to throw at him, so the President brilliantly is using the bully pulpit…”

“He is brilliantly putting them on the defensive. And he has…”

“I like how you side-stepped that one,” replied Maher.

“You don’t think he is?” Schultz asked.

“No, I do. I think you should give some money,” Maher pressed. Anyway…”

“They won’t let me,” Schultz contended. “I can’t give money.”

“You can’t give money,” Maher teased.

“Where I work, I’m not allowed to give money. I can’t give political money to anybody,” Schultz explained.

“To even the Super PAC?” Maher quizzed.

“Not even to the Super PAC,” Schultz maintained. “I can’t give money. It’s the standards of practice of where I work. If I could, I would. Damn right I would.”

“No, I believe you. That’s right, I remember Keith Olbermann got in big trouble…He just gave like a couple…”

“Because you can’t find another one under Obama,” she swiped, to boos from the audience.

Schultz hit back by noting that private sector jobs were on the rise, no thanks to Republicans.