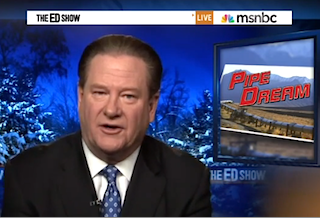 Last night, MSNBC’s Ed Schultz surprised many of his liberal viewers by coming out in favor of building the Keystone XL Pipeline that would transport oil from the Canadian tar sands to the United States. After receiving some angry letters and tweets from his fans, the host decided to address their concerns head-on Wednesday.

Acknowledging that the pipeline is a “controversial” issue that has created some strange political “bedfellows,” Schultz told his audience, “The hard cold truth is the United States is an oil and gas dependent country and we’re going to be for the foreseeable future. And I think it really is a disservice to the conversation and the debate to take an all-or-nothing approach to this. We’re not really confronting reality here.”

Schultz proceeded to go through some of common criticisms he received, addressing them one by one. While he admitted that tar sands oil releases more greenhouse gases than traditional crude oil, he noted that the alternative of transporting it by rail is actually worse.

“If this is built, it doesn’t mean that you and I are going to be consuming more,” he continued, citing another point from the State Department report on the issue. “Let’s be clear here,” he continued. “This would be, I think, a step in the right direction when it comes to energy independence.”

Schultz is clearly taking a relatively short-term practical approach that looks only at the costs and benefits of the Keystone XL Pipeline itself. Many environmentalists who oppose the construction view it as a symbolic move by the United States that makes a large-scale commitment to fossil fuels rather than investing more broadly in renewable energy.