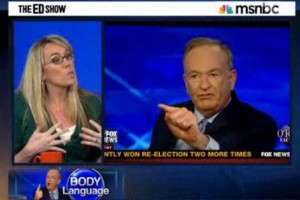 Fox News host Bill O’Reilly flipped out on liberal colleague Alan Colmes on The O’Reilly Factor Tuesday night, and launched eight Mediaite articles, a handful of MSNBC segments, and a drum circle of Fox News navel–gazing. Just when this observer was about to start throwing stuff at his laptop, though, The Ed Show host Ed Schultz pulled the baller move of booking Bill O’Reilly’s own body language expert, Tonya Reiman, to dissect his tantrum, and hopefully closing the loop on this angst-fest.

In case you missed it, Bill O’Reilly shockingly showed the world that he’s a fact-challenged hothead Tuesday night when he went off on liberal radio host and Fox News contributor Alan Colmes for pointing out that President Obama has, in fact, offered cuts to Medicare, Medicaid, and Social Security as part of the debt and deficit negotiations. This is a bit like “discovering” that your local gentleman’s club contains no actual gentlemen, but a whole mess of naked ladies: that’s why people show up, isn’t it?

Fox News programs then proceeded to go over the whole thing in at least four separate segments, while MSNBC’s Lawrence O’Donnell covered the tantrum in yin and yang segments on O’Reilly’s fact-management and anger-management issues. Horse: dead.

But then, Ed Schultz added a truly inspired wrinkle to the saga by booking Bill O’Reilly’s own body language expert, Tonya Reiman, to deliver a strange meta-critique of her own “expertise,” sussing out the subtle clues that showed O’Reilly was “frustrated” and “angry.”

Reiman’s conclusion? O’Reilly really was angry when he went off on Colmes, and didn’t really feel bad about it later. Schultz missed a golden opportunity to ask Reiman what it is, exactly, that all those bears are doing in the woods:

Setting aside, for the moment, that Ed seems to be validating Reiman’s expert opinion that Bibi Netanyahu and President Obama can’t stand each other, this focus on Bill O’Reilly’s anger issues seems to miss the point, entirely. What, exactly, is wrong with Bill O’Reilly getting angry on TV? Do people tune in to The Ed Show to hear Ed recite Zen riddles over a scented candle?

That’s not to say that you can’t make great television sans the barroom belligerence, as evidenced by Queen of Nice Rachel Maddow, the calm center of the Schultz/O’Donnell Hydrox cookie. Her program relies on the host’s virtuoso storytelling style, and not on the conflict-driven cable news theatrics that dominate the form. Maddow may be the exception that proves the rule, but remember how awesome it was when GOP strategist Alex Castellanos metaphorically spilled her whiskey on This Week? Maybe Rachel ought to consider trucking in an O’Reilly or a Hannity for the occasional Cocktail Moment.

The issue isn’t O’Reilly’s anger, in my view. That “We’ll do it live!” clip is the closest I’ve come to liking Bill O’Reilly, delivering a blistering rebuke of stupid copy, being fed to him by a busted teleprompter. I can relate to that. The problem is that, even if your job is to be the pissed-off Irish guy on a clearly-labeled opinion show, you ought to have your facts straight. As a matter of personal preference, I also prefer my POIG to have the capacity to admit when he’s wrong, and invite a whole mess of his colleagues on to tell him how wrong he was.