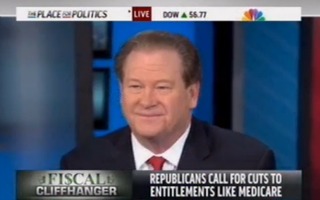 Let’s call it wishful thinking. That’s the most polite term that can be applied to this level of self-delusion. MSNBC host Ed Schultz appeared on his network on Thursday morning to weigh in with his thoughts on the ongoing negotiations between President Barack Obama and Congressional Republicans to avoid going over the so-called fiscal cliff. Schultz said that the president’s embarkation on yet another campaign, including appeals on social media and an upcoming speech cum tour in Pennsylvania, reveals just how strong Obama’s hand is in negotiations. Schultz’s position not only flies in the face of common sense, it is also betrayed by the facts. Despite the wobbliness of a handful of Congressional Republicans, the GOP is in a counterintuitively strong position.

RELATED: Obama’s Perpetual Campaign: When Will The Nation Tire Of Not Having An Executive In The White House?

MSNBC anchor Thomas Roberts asked Schultz about the president’s campaign (there is no other term for Obama’s tactics) to generate public support for increased tax rates. As of now, that campaign includes a Twitter hash tag, announced yesterday in the White House against a backdrop of concerned citizens, and a stump speech in Pennsylvania on Friday.

Despite the signals that these actions send – namely, that the president’s electoral mandate is insufficient to induce Congressional Republicans in the lame duck session to drop their longstanding objection to increased tax rates in a stagnant economy – Schultz said that he thinks Obama is holding all the cards.

“I don’t remember a president being in such a good negotiating position,” Schultz said. “The fact that the president is utilizing social media underscores that he knows he’s got a mandate.”

“I think it was a brilliant move by the president,” Schultz continued. “He’s going to circumvent the media – going right to the people, going on the road. That’s what he needs to do.” Because, as we all know, the media is collectively opposed to advancing the president’s agenda.

Meanwhile, Keith Hennessey makes the convincing case that President Obama does not have an especially unassailable negotiating position against House Republicans:

1. If there is no bill, the U.S. economy will probably dip into recession for much/most/all of 2013, and it’s impossible to predict whether such a recession would be short-lived.
2. A 2013 recession would be terrible for the country and terrible for the Obama Presidency. It would limit the President’s options across his entire policy agenda, economic and non-economic. And it could define and dominate his entire second term.
3. President Obama believes #1 and #2, and therefore avoiding the risk of triggering a recession with his veto is an even higher policy priority than his fiscal policy goal.
4. The President wants to get things done. He cares more about his own chances for policy success (across the entire breadth of his agenda, whenever he figures out what it is) than he cares about relative political blame. A scenario in which Republicans get most of the blame for a veto-triggered recession is still a loser for him if it means he can’t accomplish his second term goals.

As I wrote yesterday, the president’s appeal to social media and set piece campaign speeches is not an admission that Obama is in a weaker negotiating position than his electoral victory would suggest he should be. Campaigning is simply the only tool he knows how to wield effectively.

The president is not an executive. He is not skilled at convincing his opponents to yield on their positions and he does not give up ground easily. Given today’s POLITICO report which suggests that Obama’s conversation last night with House Speaker Rep. John Boehner (R-OH) was “curt,” even after House Republicans have repeatedly offered their willingness to move in the president’s direction on tax rates in order to get to a compromise, highlights the president’s inability to negotiate effectively.

Campaigning is not just the president’s comfort zone, it is his only fallback. When he fails to bully his opponents into capitulation in private, he turns to bullying them in public.