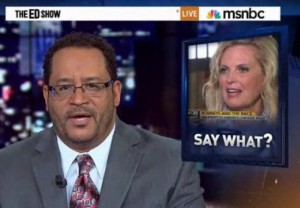 On Thursday night’s The Ed Show, fill-in host Michael Eric Dyson led a panel discussion on potential First Lady Ann Romney‘s performance in a CBC News interview with husband and Republican presidential nominee Mitt Romney. In the first clip shown, Mrs. Romney repeats the lie that the Obama campaign formulated a memo with the strategy “Kill Romney,” but even as Prof. Dyson and panel examined her role as “attack dog,” they failed to call out the bald-faced lie.

In the interview with CBS News’ Jan Crawford, Ann Romney said, “Early on we heard what their strategy was. It was ‘kill Romney,’ and that was their memo that came out from the campaign. And it’s, like, not when I’m next to him, you better not.”

Later in the interview, Mrs. Romney references the alleged strategy again, saying “I feel like all he’s doing is saying, ‘Let’s kill this guy.'”

Professor Dyson did point out that the source of Mrs. Romney’s claim was “a 2011 story in which an unnamed Democratic strategist said Team Obama would have to go negative to win,” and opined that “they haven’t personally attacked Mitt Romney” (a debatable claim), but h never gets around to explaining that it’s a bald-faced lie. In fact, an Obama supporter tweeting the #EdShow hashtag at the bottom of the screen later in the segment seems to accept the lie as fact.

The balance of the segment was dedicated to an examination of whether, as panelist Keli Goff put it, Mrs. Romney “needs to be the attack dog in a likable way.”

It’s worth noting that the most egregious dereliction here is that of CBS News and Jan Crawford, who failed to correct the lie either during the interview or after it, but it was surprising to see such a glaring falsehood go virtually unchallenged by Prof. Dyson. Perhaps there is an understandable effort to treat Mrs. Romney with kid gloves (one which I fully endorse), especially given the way perceived criticism of her has blown up in the past.

Such a concern, however, isn’t really warranted in this case. Yes, Mrs. Romney told a lie, but it was a lie she probably believed, because it was invented by someone she trusts: Mitt Romney.

Almost a year ago, now, Gov. Romney’s campaign pegged a campaign ad to a Politico piece on Team Obama’s alleged strategy to attack the former Massachusetts Governor as “weird,” but rather than focus on the Obama campaign’s repetitions of the “weird” theme, the ad focused on a quote from an anonymous source, with no apparent connection to the campaign. The ad contrasts President Obama‘s call for civility earlier this year with ominous floating shots of a Time Swampland blog that put the “Kill Romney” quote in the headline.

The problem is, that quote doesn’t come from President Obama’s campaign, or from anyone remotely connected to it. Here’s the full quote, as attributed by Politico:

“Unless things change and Obama can run on accomplishments, he will have to kill Romney,” said a prominent Democratic strategist aligned with the White House.

Not content with the mere strong (completely dishonest) implication that the Obama campaign used the words “Kill Romney” to describe their strategy, the Romney campaign set the accusation in stone with a February ad that “dramatized” an Obama campaign staffer sending an email which read “Time to take the ‘Kill Romney’ strategy to the next level.”

Now, CBS News has allowed Ann Romney to cement that lie even further with the specific claim that a “Kill Romney” strategy was part of an Obama campaign memo, while candidate Mitt Romney sat there and laughed.

Mrs. Romney is due the presumption that she’s not a liar, that she simply believed a lie that was told to her, and while it’s probably too much to expect that Mitt Romney would ever apologize to President Obama for telling that lie, here’s hoping he apologizes to his wife for making her an accomplice to it.

Far more realistic, though, is the hope that CBS News corrects the lie that they also abetted, which is their duty.