Eddie Huang, the creative mind behind the upcoming ABC sitcom Fresh Off the Boat, took to Twitter today after he saw the Asian-American series being promoted — well, see below.

The promo got so deleted, so quickly, and you can probably tell why: 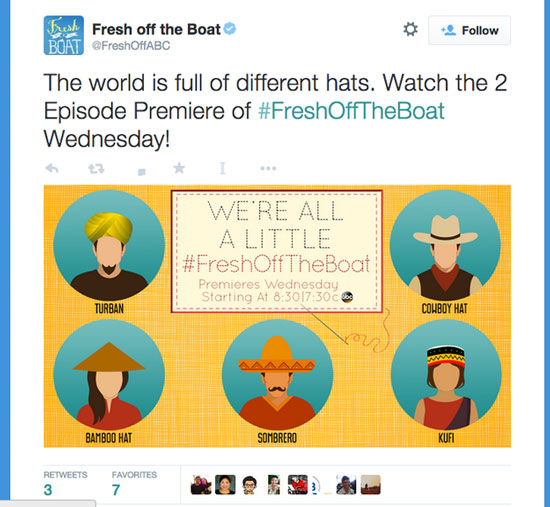 .@originalspin @whoismims someone please reverse this @FreshOffABC at least they didn't do the native american with chicken pox blankie lol

@lxnro1988 @whoismims @originalspin maybe people are just fucking morons. you have to be a mouth breathing psycho to make that graphic

@originalspin @whoismims @FreshOffABC no dude. what are you talking about? how is this "well meaning"? this is flat out TERRIBLE

.@originalspin @whoismims @FreshOffABC the root cause is hiring people who have NEVER LIVED THESE LIVES and paying them to represent us

And, as Wall Street Journal writer (and dad of one of the stars) Jeff Yang pointed out, they had to have known that Asians would see this:

The author/chef/provocateur/panda lover has openly stated his disdain for the creative meddling behind the show, writing a controversial article in Vulture expressing his anger at studio interference in the show, and wondering whether his audience — whatever it was now — would understand his story. “I began to regret ever selling the book, because Fresh Off the Boat was a very specific narrative about SPECIFIC moments in my life, such as kneeling in a driveway holding buckets of rice overhead or seeing pink nipples for the first time,” he wrote. “The network’s approach was to tell a universal, ambiguous, cornstarch story about Asian-Americans resembling moo goo gai pan written by a Persian-American who cut her teeth on race relations writing for Seth MacFarlane.”

So far, the series has been getting positive buzz, but this author really really really hopes that it’s true to the memoir the series is based on, and not Chopstick Asians: SVU. The series premieres February 4.