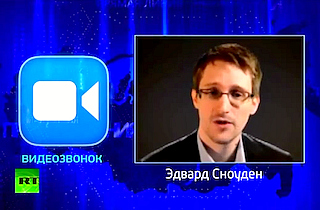 Russian President and 2005 Super Bowl champion Vladimir Putin took call-in questions on Russian television Thursday morning, and surprise got a celebrity caller: Edward Snowden, who’s living in Russia under a temporary amnesty after being stranded in the Moscow airport while on the run from the U.S. for leaking classified NSA documents.

“Does Russia intercept, store, or analyze in any way the communications of millions of individuals?” Snowden asked, in a rare public-ish appearance. “And do you believe that simply increasing the effectiveness of intelligence or law enforcement investigations can justify placing societies, rather than subjects, under surveillance?”

“Mr. Snowden, you are a former agent, a spy, I use to be working for an intelligence service; we are going to talk one professional language,” Putin replied through a translator. “Our intelligence efforts are strictly regulated by our law. So our special forces can use special equipment as they intercept phone calls or follow someone online. You have to get court permission to stalk a particular person. We don’t have mass system of such interception. And according to our law it cannot exist.”

“Of course special services have to use technical means to respond to [terrorists’] crimes,” Putin said. “Of course we do some efforts like that. But we do not have a mass scale uncontrollable effort like that. I hope we won’t do that. We don’t have as much money as they have in the States, we don’t have these technical devices that they have in the States. Our special services, thank God, are strictly controlled by the society and the law, and are regulated by the law.”