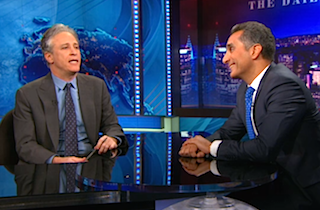 Bassem Youssef, the satirist known to most Americans as Egypt’s Jon Stewart, is no longer able to produce his Daily Show-like program in Cairo due to threats from authorities. Last night, he returned to New York to appear on the actual Daily Show — not as an interview guest, but rather as a comedic contributor in the vein of John Hodgman or Kristen Schaal.

Just last week, Youssef announced that he has joined the Harvard Institute of Politics at the John F. Kennedy School of Government as a resident fellow for the spring semester, but there he was sitting next to Jon Stewart Monday night, performing a scripted comedy bit about U.S. relations with Egypt and the rest of the region.

“America is like a dog with a hot spot on its butt called the Middle East,” Youssef told Stewart. “And you think you have to keep licking it, but you’re just making it worse.” He then brought out a cone for the U.S. to wear around its neck.

Asked one more time what America should do in Egypt, Youssef said, “We want you to fuck off and leave us alone… but not right away. We could still use the aid money.”

While it’s possible that this was just a one-time contributor appearance, Youssef will be so close by in Massachusetts this spring that it would not be surprising for him to return to offer up a similar perspective on these issues from time to time.