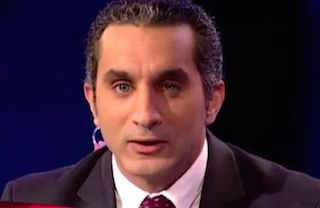 Over the past few years, Bassem Youssef’s Al Bernameg (or “The Programme”), known as Egypt’s answer to The Daily Show, has been kicked off the air by whatever regime happened to be in charge at the time. In November 2013, Youssef was suspended moments before airtime and earlier this year his show was pulled for the weeks leading up to the Egyptian election. But now, it appears that Al Bernameg is going away for good, and according to Youssef it was his decision.

Youssef made the announcement from his Cairo studio on Monday, citing “harassment” from forces who did not appreciate his satirical approach to the news. After the host made jokes about former army chief turned military ruler Abdel Fattah Al-Sisi, the regime opened an investigation of Youssef to determine whether he was guilty of crimes under Egyptian law. Before that, former president Mohammed Morsi’s regime arrested and interrogated him for making jokes about them on television.

“I’m not a revolutionary and I’m not a warrior,” Youssef told reporters following his announcement. “I was expressing my views once a week. The present climate in Egypt is not suitable for a political satire program. I’m tired of struggling and worrying about my safety and that of my family. Stopping the program sends a much stronger message than if it continued.”

Earlier this year, when 60 Minutes profiled Youssef, reporter Bob Simon asked the host if he was ever afraid of getting hurt or even killed by the Egyptian government just for telling jokes. “I mean if it happens, it happens,” he said. “You should let go of your fears, so you can be able to operate.”