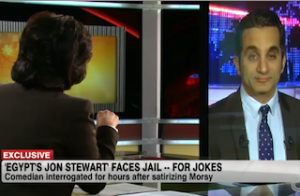 After five hours of interrogation by authorities in Egypt, Bassem Youssef, often referred to as the Jon Stewart of that country, spoke to CNN’s Christiane Amanpour for an exclusive interview about the ordeal. Rather than back off the critiques of President Mohammed Morsi that have made the target on an investigation, Youssef appeared to strengthen his attacks against the Muslim Brotherhood leader.

Youssef told Amanpour that prosecutors had him watch clips from The Program, a Daily Show-esque comedy satire that he hosts, and “answer questions, line by line, phrase by phrase and joke by joke.”

As for the real Jon Stewart, Youssef said that they have been in touch since he appeared as a guest on The Daily Show last June. “Maybe he will talk about me on the show,” he said, before waving to the camera and saying, “Hi, Jon.”

And if you missed Youssef’s appearance on The Daily Show, you can view that segment below, via Comedy Central: