‘Either With Us Or Against Us’: The Five Hosts Say 3 New Boston Suspects Should Be Treated As ‘Terrorists’
VIDEO

‘Either With Us Or Against Us’: The Five Hosts Say 3 New Boston Suspects Should Be Treated As ‘Terrorists’ 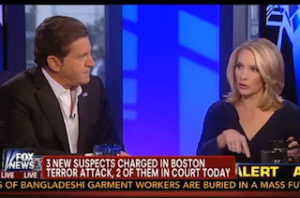 Wednesday afternoon of Fox, the hosts of The Five took on the developing news of the day concerning the three additional suspects charged in the Boston Marathon bombing case. While the three young men have been charged with relatively minor crimes like obstruction of justice and lying to federal authorities, hosts Eric Bolling, Dana Perino and others argued they should be treated as ‘terrorists.”

Echoing the words spoken by her old boss in his address to the nation following the 9/11 attacks, Perino said, “You are either with us or you’re against us. And if you are involved in terrorism you too are a terrorist.” She expressed concern that “we are treating this more like a criminal situation when it is actually a war… We have a war going on and it’s happening right here on our soil.”

Greg Gutfeld agreed with Perino’s assessment, taking particular offense at the fact that the alleged cover-up took place on a college campus. “They have to be punished they have to be punished harshly,” Gutfeld said, “not simply for helping these guys but for shattering the dorm room utopia that is going on right now that allows this kind of thinking to persist. it’s disgusting.”

Bolling asked how “aiding and abetting” a terrorist is “any less of a crime” than committing the act of terror itself. Outraged that the maximum penalty for the suspects appears to be five years in prison, he wanted to know why there were not additional charges that could be brought against them.

Towards the end of the segment, Perino offered her own suggestion for how the suspects should be punished. “Send their rear ends back to wherever” they came from, she said. “You can go to the prison there.” Even better, she suggested that the U.S. “refurbish” each cell at Guantanamo Bay to resemble the prisons from the home country of the inhabitants. “Kazakh jail for you!”

As Bolling indicated, the three new suspects will be tried at the federal court in Boston, with maximum sentences of five years for Dias Kadyrbayev and Azamat Tazhayakov and eight years for Robel Phillipos.