Eliot Spitzer Grills Rep. Dennis Kucinich On Being Too Friendly With Syrian Dictator 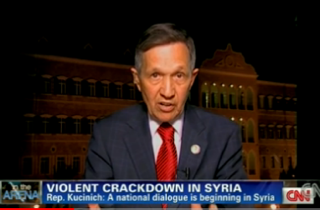 Most of what comes into American news from Syria are horrible tales of purges currently being undertaken by the draconian regime in power, in order to assure dictator Bashar al-Assad‘s immunity from the democratic movements across the Middle East. Rep. Dennis Kucinich, however, has brought back from Syria a different story, and on In the Arena last night, host Eliot Spitzer took the Congressman to task for fraternizing with a murderer.

Spitzer first allowed Rep. Kucinich to explain what he was doing in Syria in the first place, and what he got out of his rare private meeting with the Syrian leader– “Does he genuinely want to reform governance?” While Rep. Kucinich joked that he couldn’t “look into his soul,” he did vouch for al-Assad’s awareness that he needed “to bring democratic reforms… he is ready to work with pro-democracy advocates.”

That last part, however, Spitzer found no justification for, and he didn’t mince his words: “this is a brutal dictator who over the course of his and his father’s regime has murdered tens of thousands of people.” To Kucinich’s argument that the possible replacements for a toppled Assad regime may be a worse remedy than the disease, Spitzer presented disbelief. “You can’t possibly be saying that the concern of disruption after his departure should in any way excuse or permit us to support his continued reign of terror.” This incensed Rep. Kucinich, who snapped back, “don’t try to put me in a position where I’m suddenly endorsing a regime whose human rights record has been abominable and where there’s violence in the streets.” At that assertion, Spitzer seemed to shift his accusations from support to mere naivete: “he’s Western-educated, listens to Western music… and then he murders.”

The heated exchanged via CNN below: