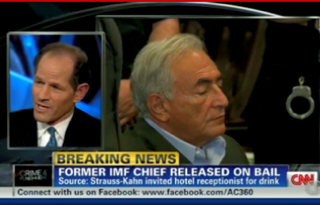 Every time a political figure has a sex scandal, CNN is going to have to smoothly maneuver around the fact that they hired former New York governor Eliot Spitzer. If they don’t mention him (or he doesn’t discuss the news), the network will be accused of bias– and if they do, it reignites the desire to ridicule. It’s a rough spot for the network to be in, but, at least in the case of former IMF head Dominique Strauss-Kahn‘s assault allegations, they handled it as gracefully as they could: by making Spitzer put on his attorney hat.Spitzer and fellow famed attorney Mark Geragos joined Anderson Cooper last night to discuss the little evidence that has been made public and the conditions on which Strauss-Kahn was allowed bail. While it initially appeared to intend to be a bit of a round table, Geragos and Spitzer, true to their natures, animatedly argued for and against Strauss-Kahn’s conviction against each other. Based on the information at hand, Geragos was skeptical that the case was a slam dunk for the prosecution. “When these things leak,” he said of the details the press has since found, “it is done to create bad facts.” He also argued that the grand jury indictment was a “rubber stamp” more than evidence that the case was convincing, to which Spitzer countered that he found the indictment “powerful” and that the defense counsel, now being cornered into arguing consent rather than an alibi, would have a harder time proving the victim in this case was willingly participating in illicit behavior. “I think the detectives in this unit in particular are very hesitant to proceed with a case that they do not believe they can really prove,” Spitzer noted, arguing that forensic evidence of struggle could overcome any evidence that could be explained away on consensual grounds.

Since his program has gotten the audience accustomed to listening to him as a political commentator, listening to Spitzer channel his inner legal wonk was a refreshing way to bring him into the spotlight without causing a splash. Not only was it the absolute most appropriate way to get his take on the issue, having him debate one of the most respected defense attorneys today on the matter was a good reminder of why Spitzer’s opinion on cases like these matters.