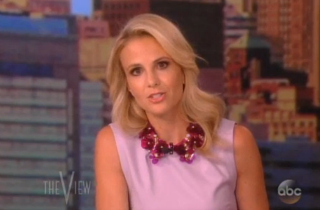 This morning on The View, Elisabeth Hasselbeck said her farewells to her colleagues and the talk show she’s co-hosted for ten years, following last night’s announcement that she will host Fox & Friends beginning in September.

“It was reported last night that our Elisabeth Hasselbeck is leaving us to join the Fox network,” Barbara Walters kicked off the show, while clearly while battling tears.

When given the opportunity to speak, Hasselbeck confirmed her departure and praised the behind-the-scenes View crew that she believes made her job much easier and more efficient. She offered praise for the show’s co-creator Bill Geddie, who she said has offered her unconditional support throughout the last ten years.

“You are one of the most talented artists on this planet,” Hasselbeck said across the table to co-host Whoopi Goldberg. “You are even more loving than you are talented. You are walking unconditional love. I am blessed to have called you a friend.”

Goldberg’s voice cracked in tears as she muttered a thank you in response.

“Joy and I have spent the last 10 years sparring over politics, but I have an insane amount of respect for you,” Hasselbeck turned to Joy Behar. “I love you. I truly do.” She also praised the absent Sherri Shepherd as her “sister in Christ, my friend for life.”

As for Barbara Walters, Hasselbeck asserted that she believes she has graduated from the “Barbara Walters School of Broadcasting and Journalism,” having sat next to the legendary interviewer for a decade now. With those skills absorbed by osmosis, Hasselbeck claimed she is now “mcore than prepared to move forward” with a job like hosting Fox & Friends.

“You stood by your opinions even when things were very heated,” Walters said. “Tell Roger Ailes you gotta come back and visit us.”

“Won’t you be a fish out of water there [at Fox]?” Behar joked about Hasselbeck’s conservative politics. “I have appreciated your presence here a lot. It was exciting for the show.”

“You’ve been the cat’s meow,” Goldberg said, once again fighting through tears.

Watch the full farewell below, via ABC: