Elisabeth Hasselbeck to Step Down as Co-Host of Fox & Friends 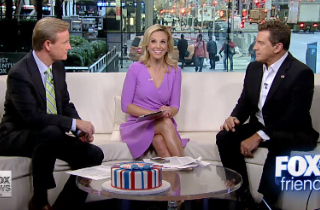 Elisabeth Hasselbeck announced on Monday afternoon that she will be stepping down from her role as a co-host of Fox News’ Fox & Friends at the end of the year. Hasselbeck, who replaced Fox News host Gretchen Carlson just over two years ago, “…has decided to put her career in television on hold while she raises her three children,” according to a press release.

“Oftentimes, the most difficult decisions are between two great things. Throughout my 14 years working in television, I have never experienced a more positive and thoughtful atmosphere than FOX News Channel, thanks to the strong leadership of (FOX News Chairman & CEO) Roger Ailes, who has created the best working environment a woman and mother could ask for. His understanding, compassion, and kindness was exemplified when I shared with him that I am entering into a season where I want to start my day with my children first, and he offered his blessing to do so. With a heart full of gratitude and the peace that God has given me, I am confident that this personal decision is the right one for our family, and we will be joining all of you watching Fox & Friends each morning as we get ready for school together.”

Hasselbeck will continue co-hosting duties until mid-December; she will vacate the Fox & Friends couch she has anchored along Brian Kilmeade and Steve Doocy. Fox News Chairman and CEO Roger Ailes said of Hasselbeck’s departure, “Elisabeth and I discussed this at length over several weeks, and while I would love for her to continue here, I respect her incredibly difficult, yet deeply personal decision. She has been a great addition to the Fox & Friends franchise.”

According to the press release, a variety of rotating co-hosts will take Hasselbeck’s seat until a replacement is formally named.