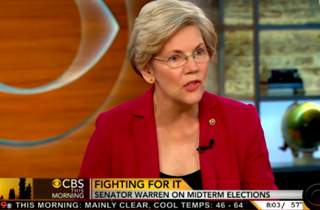 During an interview on CBS’s This Morning, Sen. Elizabeth Warren (D-MA) slammed New Jersey Governor Chris Christie for implementing a mandatory quarantine on health workers returning from West Africa, arguing that the science behind his ebola-preventing ban didn’t pan out.

“He should bring out his scientists who are advising him on that, because we know that we want to be led by science. That is what’s going to keep people safe,” she argued. “Science, not politics. I think that’s what’s critical.”

Her remarks came soon after a a controversial episode where Christie had quarantined a nurse, recently returned from West Africa, in a tent in a parking lot, despite a later discovery that she did not have ebola. So far, Christie has refused to lift the mandatory quarantine.

Warren, on the show to promote her new book A Fighting Chance, tied Christie’s highly-criticized ebola mandate to the stakes of the upcoming midterm elections. “This is why elections matter and why they matter over time,” she argued:

Ebola is not new, we’ve known about it for a long time and we were putting money into funding Ebola many years ago and Republicans have cut funding overall for medical research, for the National Institute of Health, and Ebola has not been a priority.So now we’re in a position where instead of making those investments up front — we wait until people due, now we’re going to spend billions of dollars and some real risk to our country.

Watch below via CBS: