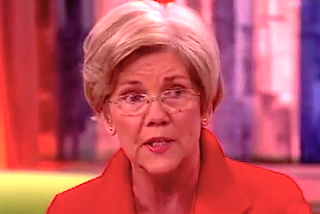 Elizabeth Warren sees some of herself in Donald Trump. One day after The New York Times columnist Paul Krugman gave Trump props for getting it “right” on economic policy, Warren made a similar argument on The View.

“There are a lot of places where he gets out and talks about important things,” Warren said. “Like Donald Trump and I both agree that there ought to be more taxation of the billionaires, the people who are making their money off Wall Street.” When Joy Behar said that “liberal” position “must be driving the right-wingers out of their minds,” Warren shot back, “Don’t call it liberal, it’s a pretty right position.”

But it’s “the other half of Donald Trump” — the one that “wants to rip 11 million people who live in this country, rip them out of their families, take them away and deport them” — that Warren disagrees with. “You can’t be president of the United States if that’s your view about how we’re going to solve immigration reform,” she said. “That’s wrong.”

As for why Trump’s message is “resonating” so strongly with Republican voters, Warren said, “You’ve got to remember who he’s being measured against on the Republican side, no offense.”

Finally, Raven-Symoné put Warren on the spot and asked what she would say if Vice President Joe Biden entered the race and asked her to be his running mate. “This isn’t about me,” the senator answered.