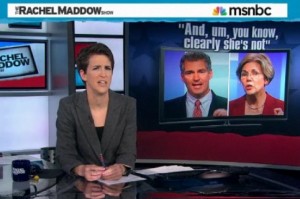 On Monday night’s The Rachel Maddow Show, host Rachel Maddow, over the course of two segments, excoriated Sen. Scott Brown (R-MA) for his attacks on opponent Elizabeth Warren‘s family heritage, saying “I don’t understand why this is not a national scandal.”

Rachel and guest Melissa Harris Perry also drew a canny parallel between Brown’s attacks and Republican policies like voter I.D. and “papers, please” immigration laws. If the media is missing the boat on Brown’s ugly attacks, however, they’re also missing an entire navy in former Massachusetts Governor Mitt Romney‘s participation in them.

In the first segment, Rachel set the table, explaining Sen. Brown’s somewhat dire reelection prospects, and detailing his attacks on Warren at their first debate last week. “She checked the box claiming she was a Native American. and clearly, she’s not,” Brown said at that debate, to which Rachel added “Clearly, just look at her.”

She then blasted Sen. Brown for “declaring himself the authority on Warren’s heritage based on how white she looks to him. Brown is confident just asserting that Warren is not Native American. He can tell. Can he smell it?”

“I don’t know, and neither do the viewers know, whether in fact she got ahead as a result of that checking of the box,” Sen. Brown later said at that debate, which Rachel connected to Mitt Romney’s recent hidden camera adventure, although tangentially, and compared the underlying notion to the infamous Jesse Helms “Hands” ad (produced by Maddow sparring partner Alex Castellanos).

“Oh, getting ahead,” she said. “Right. Resenting affirmative action. That never gets old with white voters. Remember Mitt Romney joking to his donors about how much easier he’d have it if only he were Mexican?”

She’s absolutely right, as is Melissa Harris Perry, who, in the second segment, explains how Brown’s attitude manifests itself in broader terms with things like Birtherism, voter I.D., and “papers, please.”

However, if you let the Romney hidden camera segment about wishing he could be Mexican run a little bit longer, you’ll see that the Republican candidate for president also directly attacked Elizabeth Warren’s family heritage:

As you can see, Romney explains the controversy the same way a lot of white folks, like Sen. Scott Brown, would. “She’s the woman who’s running for US Senate in Massachusetts,” Romney says, “who said that she’s Cherokee, has put in her application over the years that she’s Cherokee, and Harvard put down that she’s one of their minority faculty members. It turns out that at most she’s 1/32 Cherokee, and even that can’t be proven.”

Now, I don’t know or care if Elizabeth Warren is part Native American, although her explanation at Thursday night’s debate sounded reasonable and convincing. While Warren’s ancestry isn’t convincing enough for Mitt Romney and Sen. Scott Brown, it was enough for her father’s racist family. Believe her or don’t, but to base your attack on a lack of documentation is to display profound ignorance of the fact that underlies Mitt Romney’s offensive desire to exploit Hispanic identity: being a person of color in this country is not some big advantage.

It’s possible there’s little documentation to support Warren’s claim because it isn’t true, but it’s just as possible that it’s because many people of color in the history of this country, if their complexion and circumstances allowed it, would “pass” for white in order to avoid persecution, and even murder, by white people. That’s just one of the many ways that racism has messed with people’s family treesin this country, but that’s something about which Mitt Romney wouldn’t know, or care, and another example of how members of a privileged majority find it easy to ask for papers they, themselves, already have.

Scott Brown has added some much-needed clarity to this debate, though, by making the underlying issue obvious. “Clearly, she’s not,” he says, the obvious corollary being that clearly, Scott Brown is white. Why is this clear? Has anyone seen Scott Brown’s papers?

To the extent that it matters, the racism behind the Brown/Romney attacks is likely unintentional, springing from the fact that questions of race are completely beyond their experience, but if you doubt that racism, then all you have to do is inject that question into their experience. Neither Mitt Romney nor Scott Brown has ever had to prove they’re white. Maybe it’s time they produced some evidence that they’re not just “passing.” Would that national media sit silently if a U.S. Senator or presidential candidate asked either of these men to prove they’re not black, or Mexican, or even Native American? Maybe it’s time someone did ask. Papers, please.

Here’s the first segment on Scott Brown, from The Rachel Maddow Show:

And here’s the second segment on Scott Brown, from The Rachel Maddow Show: