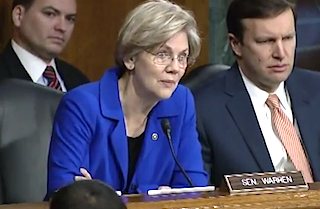 Sen. Elizabeth Warren (D-MA) used her seat on the Senate Health, Education, Labor and Pensions Committee, on which Sen. Rand Paul (R-KY) also sits, to make a not-so-subtle reference to that Republican senator’s assertion last week that he has “heard of many tragic cases of walking, talking normal children who wound up with profound mental disorders after vaccines.”

“These vaccines work so well that the memory of these diseases has faded,” Warren said of measles, polio and other diseases the U.S. was thought to have eradicated with vaccines. To clear up any lingering misconceptions about the safety and effectiveness of those vaccines, Warren asked a few simple questions to Dr. Anne Schuchat, the CDC’s director of the National Center for Immunization and Respiratory Diseases.

“Is there any scientific evidence that vaccines cause autism?” Warren asked.

“No, but some of the diseases we vaccinate against can,” the doctor answered. After several more scary questions with negative answers, Schuchat concluded, “Vaccines are safe and highly effective and it’s important for parents to know they’re the best way to protect their kids.”

So far, Sen. Warren insists she has no plans to run for president in 2016 — despite the dozens of celebrities calling on her to do so — but if she changes her mind and ends up debating Paul, this should make for a hot topic.