Ellen DeGeneres Fires Back At One Million Moms, Mocks Them For Only Having 40,000 Fans On Their Facebook Page
VIDEO

Ellen DeGeneres Fires Back At One Million Moms, Mocks Them For Only Having 40,000 Fans On Their Facebook Page 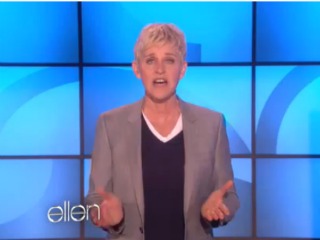 Yesterday (in an episode airing today), talk show host Ellen DeGeneres took a little time to address a media watchdog group called “One Million Moms” that has called for JCPenney to pull DeGeneres as its spokesperson because she is gay.

“Normally I try not to pay attention to my haters,” DeGeneres told viewers. “But this time I’d like to talk about it because my haters are my motivators.”

This organization thinks I shouldn’t be a spokesperson because I’m gay. So, uh, for those of you who are just tuning in for the first time: It’s true; I’m gay. I hope you’re sitting down. I hate to break it to you this way. But anyway…

So, they wanted to get me fired, and I am proud and happy to say that JCPenney stuck by their decision to make me their spokesperson.

“I mean, if they have a problem with spokespeople,” DeGeneres continued, “what about the Pillsbury Doughboy? I mean, he runs around without any pants on and basically begging people to poke his belly. What kind of message is that?” 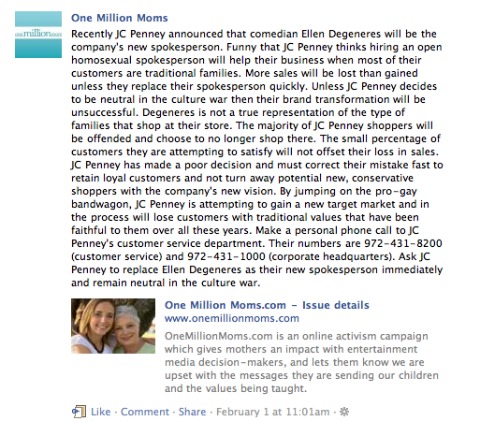 “First of all,” Degeneres responded, “being gay — or pro-gay — is not a bandwagon. You don’t get a free ride anywhere. There’s no music, and occasionally we’ll sing ‘We Are Family,’ but that’s about it.”

She thanked those who have voiced their support — including those on One Million Moms’ page — and offered a list of the sort of things she stands for. Have a listen: