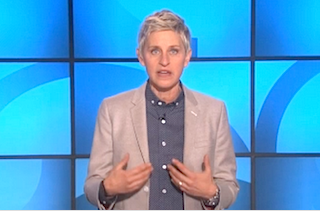 As one of the most prominent out gay celebrities in the world, Ellen DeGeneres has faced more than her fair share of criticism from those who disagree with her “lifestyle.” And while the daytime talk show host typically ignores such homophobic attacks, she decided this week that she had to say something about a recent op-ed in the Christian Post from Pastor Larry Tomczak.

In his article, which tackles Hollywood’s larger “gay agenda,” Tomczak wrote that “‘Ellen DeGeneres’ celebrates her lesbianism and ‘marriage’ in between appearances of guests like Taylor Swift to attract young girls.” He also highlighted what he sees as nefarious elements of Modern Family (“features a gay couple who married over two episodes recently”), Glee (“features over five gay characters”) and Scandal (“has two gays”) among other popular programs.

“Let’s just break this down, I’m not ‘married,’ I’m married. That’s all,” she told her audience, copying the author’s scare quotes. After listing off his other complaints, she added, “If you ask me, Larry’s watching a lot of gay TV.”

Speaking to the pastor, she said, “The only way I’m trying to influence people is to be more kind and compassionate with one another. I don’t have an agenda.”

DeGeneres posted the video of her comments on Facebook page at 12:40 p.m. ET on Wednesday and it already has 20,000 likes: