Ellen Thanks Obama for Obamacare: ‘Everyone’s Very Grateful You Did This’ 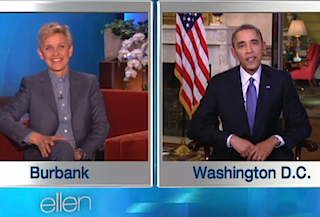 If President Barack Obama found the perfect adversary in Bill O’Reilly when the two men sat down for a pre-Super Bowl interview last month, he may have found the ideal ally in Ellen DeGeneres. With 10 days to go before the March 31st Obamacare deadline, the president brought his message to The Ellen DeGeneres Show, where the host did her best to stress the importance of affordable healthcare for all.

“It’s doing very, very well,” DeGeneres said of the Obamacare enrollment process. “It had a rough start, but you’ve got 5 million people that have signed up so far, which is an enormous amount of people. So it’s successful.”

The one question she had for Obama about the program concerned the upcoming deadline. “Why is there a deadline?” she asked. “Because I think it is important for everyone to have healthcare, and a lot of people think, ‘Oh, I’ll be fine,’ and as you said, you never know what’s going to happen.”

The president explained that unlike employer-based insurance, the insurers in this case are pricing for the year and need to assess the risk pool before setting those costs for 2014. If you miss the March 31st deadline, the next chance to sign up will be in the fall for 2015.

“Everyone’s very grateful that you did this,” DeGeneres said, speaking on behalf of her audience and the country. “I think it is important for people to sign up. It’s just better to be covered, you just never know.”

Later in the interview, the pair moved on to lighter topics like political television shows House of Cards and Scandal and DeGeneres’ successful attempt to break Obama’s retweet record with her celebrity-packed Oscar selfie.

Watch video below, via The Ellen Show: