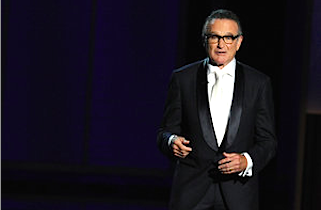 The 2014 Primetime Emmy Awards are set to air Monday night, August 25 on NBC with Seth Meyers as host. And according producer Don Mischer, the show already has a tribute segment to Robin Williams in the works.

“With the tragic loss of Robin, we’re trying to deal with that and figure out what to do in the right, appropriate and meaningful way,” Mischer told TV Guide Wednesday. “It’s about what can we do to properly remember Robin and create perhaps an emotional moment about Robin, knowing all that he did for all of us who love entertainment and love comedy.”

Mischer had a working relationship with Williams that dated back decades and included at least 30 different shows and specials. “We all know what Robin meant to the television community and to everyone, and the unique take on comedy that he brought to all of us. It’s about what can we do to properly remember Robin and create perhaps an emotional moment about him,” he said.

Williams was nominated for eight Emmy Awards over the course of his career, staring with Mork & Mindy in 1979, and won two for Individual Performance in a Variety or Music Program during the late 1980s. Most recently, he earned a nomination for his stand-up special Robin Williams: Weapons of Self Destruction in 2010.

Just last year, Williams graced the Emmy stage to pay tribute to his comedy idol Jonathan Winters, who passed away in April 2013 at the age of 87.