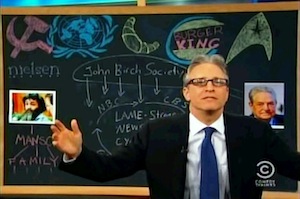 Glenn Beck‘s sudden departure from Fox News? Jon Stewart thinks its the best evidence to date that the world is coming to an end! When news broke yesterday that Beck’s days at Fox News were suddenly numbered, it was only a matter of time before The Daily Show host made some hay from the announcement, which he did tonight in epic fashion, complete with chalkboards, dramatic eyeglasses and apocalyptic rhetoric that has been Beck’s trademark style for two years.

Tonight’s episode did without its standard show opening, choosing instead to replicate the Glenn Beck‘s cold open, particularly in the style of yesterday’s episode when Beck quietly sat on a stool and in a maudlin style, informed his audience that, yes, the rumors of his departure were true. What followed was an epic impersonation of Beck style that seemed more like good-natured ribbing than mean-spirited teasing. Truth is, Stewart has had a lot of fun with Beck’s style (and yes, Comedy Central has sold a lot of soap at Beck’s expense as well.)

Stewart’s imitation of Beck was so complete — with every nuanced tick, idiosyncratic oratorical flourish and pregnant pause — that it confirmed that he’s actually a regular viewer (dare one say fan? student?) of Mr. Beck’s; there even seemed to be a hint of mutual respect in the tone of the parody (that lasted over segments). Remember that only Glenn Beck and Jon Stewart know what it’s like to promote and host a rally on the Washington Mall attended by thousands of fans; in that light, peers is not an inappropriate term.

The entire parody ended with Stewart admitting that he’d miss Beck’s schtick, if only because it was good for business. Its also worth noting that, earlier today during Glenn Beck’s episode in which he continued to discuss his departure from Fox News, Beck turned to camera to speak directly to Stewart and ostensibly told The Daily Show host “what are you going to do without me to kick around” (or words to that effect.)

Watch the epic parody below, which was delivered over the first two segments of the show tonight, both of which are embedded below courtesy of Comedy Central: