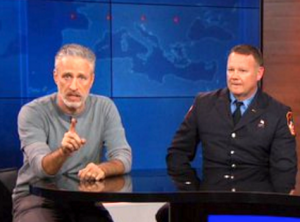 Jon Stewart made a pretty huge return to The Daily Show tonight to lobby on behalf of 9/11 first responders for a health care bill being held up in Congress.

He riffed a bit with Noah about how messed up it is that there are senators who actually have a problem with legislation taking care of those first responders before showing off his trip to D.C. with a group of them.

Stewart traveled around to a few senators’ offices “to see if shame works.” He eventually managed to confront Senator Rob Portman, who ended up supporting the legislation.

But it was Senate Majority Leader Mitch McConnell that faced most of Stewart’s wrath. He went through the “purely political reasons” McConnell isn’t supporting the legislation and said he clearly “doesn’t give a shit about anything but politics.”

Noah reminded Stewart of the 2010 panel he put together on The Daily Show comprised of first responders demanding the bill initially pass, and suggested he get that panel back together, And without giving anything away, what happened next was a pretty tough punch to the gut.

He called on everyone to tweet at McConnell and Paul Ryan to support 9/11 first responders with the hashtag #EndtheFuckery. Or, for less profane purposes, #WorstResponders.

Watch both segments above, via Comedy Central.