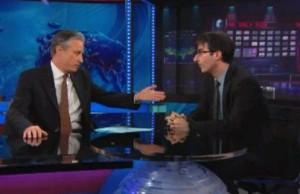 On Thursday, Daily Show correspondent John Oliver ventured to Gabon to get to the bottom of why Gabon insists on sending money to UNESCO. It was truly… “epic.” (JON STEWART SAID IT FIRST.)

Former Rep. Robert Wexler explained that Israel and Palestine ought to negotiate directly and, so, if Palestine chooses instead to negotiate via the UN or any of its agencies, “we’re not going to fund the agencies,” as per the law. High five!

The thing is, though, that UNESCO holds a democratic vote to decide membership. But, no matter. We have the law on our nation’s side, starving African children, tsunami victims or our future relations with Iran and Afghanistan be darned. Plus, we have a message to send.

“And when you physically cut off your nose to spite your face,” Oliver noted, “that face is sending a message. And that message is ‘Don’t fuck with me!'” ‘Cause if I’m willing to do this to myself, what am I willing to do to you?” Submit you to segments about Assad’s affinity for the band LMFAO, FOR ONE!

RELATED: Maddow And Sen. James Inhofe Have Tense Exchange Over His Ties To Ugandan Anti-Gay Bill

So Oliver ventured to Gabon to confront these “tyrannical philanthropists” about their $2 million donation to UNESCO. He explained to a group of school children that, due to the law, they would now have to give back their UNESCO-funded books. But the children clung to them, selfishly and without any regard for the U.S.’s relationship to Israel. And no, we can’t change this law! Because we don’t want to! We didn’t create this problem! Just the law! Shut up!

Check it out, via Comedy Central: