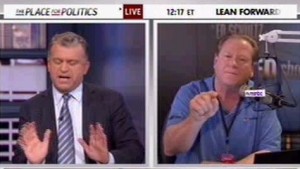 They don’t call him Big Ed for nothing. During some post-game analysis of President Obama‘s press conference this afternoon, MSNBC’s Ed Schultz laid down the law with colleague Dylan Ratigan for interrupting him. Responding to Ratigan’s framing of the American Jobs Act as a dud for both sides, Schultz tried to explain that “you can’t do this overnight.”

When Ratigan tried to interrupt, Schultz was having none of it. Ratigan protested, “but I want to address…” to which Schultz replied, “I don’t care what you want to address, I didn’t interrupt you!”

Ratigan apologized, and a piqued Schultz paused, and before continuing, asked, “Do I have the floor?”

Schultz went on to explain that the President’s plan puts “several million people back to work,” to which Ratigan interjected, “1.2 million,” (a lowball estimate. The President cited an independent analysis that puts the number at 1.9 million) to which a frustrated Schultz replied, “It’s a start! Where’s the Republican start?”

Ratigan, again, cut in. “Ed, did you hear what I just said?”

Schultz replied, “I gotta go back and do my radio show, I’m not going to be interrupted by Dylan,” and ended his participation in the segment.

While Ratigan allowed for President Obama’s good intentions, Schultz was clearly frustrated with his colleague’s seesaw framing of the American Jobs Act as a problem for both parties, framing it as a choice between “either a million jobs for Obama to get re-elected, or torpedos a million jobs in order to get the Republicans in.”

Schultz was essentially pointing out that there’s a big difference between a guy who has a plan to start building Rome, but not in a day, and a party that fiddles as it sets fire to that plan.