Epic Fail: The GOP’s Pitiful Attempt At A ‘Tribute’ To Ron Paul
video

Epic Fail: The GOP’s Pitiful Attempt At A ‘Tribute’ To Ron Paul 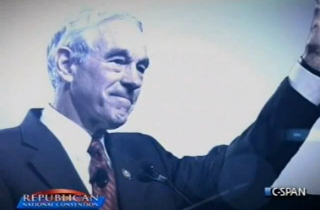 Last night, we reported on the Republican National Convention’s tribute video for Rep. Ron Paul, full of praise for the outspoken sorta-libertarian who has done an exceptional amount to change the conversation in Washington. The video featured various Republicans heaping praise on the outgoing congressman for his consistency, his fiscal responsibility, and his dedication to never backing down on his principles.

Let me be a downer here and say: The GOP isn’t fooling anyone.

It’s clear the party is at least somewhat afraid of losing the Paulites to Libertarian candidate Gary Johnson (or Obama, or non-voting), and this “tribute” video — much like the party’s newfound “respect” for Paul — came off as an overproduced attempt to save face with a group the stodgy, fickle GOP has mistreated, ignored, and wished away over the last five years.

The video made frequent mention of Paul’s efforts to reduce the federal deficit and added boilerplate praise for his “fiscal responsibility” and “never back down”-ness, but it conveniently glossed over the many important issues that have made Paul so attractive to his followers — issues that the Republican Party seems entirely unwilling to incorporate into their platform.

The tribute did make slight nods to Paul’s belief in sound money and his fight to audit the Federal Reserve. But it ignored Paul’s fight to end GOP sacred cows like the costly and futile War on Drugs; his fight to protect civil liberties from executive overreach like the PATRIOT Act; and his battle against an unsustainable foreign policy of “maintaining empire” and playing World Police.

The video also neglected to mention just how Paul would like to cut the deficit.

Instead of the mainstream Republicans’ supposedly “radical” plans to cut from future spending growth, Paul wants to slash budgets left and right… especially the GOP’s sacred-cow national defense. He wants to end all corporate tax loopholes; something the GOP is reluctant to touch. He considers such “pro-business” tax manipulation to be synonymous with crony capitalism. 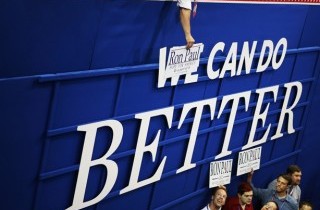 The GOP must have thought this video could placate Paul supporters enough to get their vote. Plenty of Republican officials expressed certainty that the Texas congressman will leave the convention fully endorsing the Romney/Ryan ticket. Despite Paul telling Fox’s Neil Cavuto that he has “no plans” to endorse, Arizona Gov. Jan Brewer said she is certain he will hop on the bandwagon.

But that’s just haughty. And wrong. Because until the party actually tries to change instead of occasionally throwing a superficial bone to Paul, then you can expect many of his supporters to maintain a firm position of “not voting for Romney.”

They walked out, and will likely continue to walk out, because the difference between Paul’s following and the GOP’s rank-and-file “Ew, it’s Romney, but we must support him” types is that the former truly believe in consistency and principles, and are wholly interested in maintaining it, while the latter seem blind in their belief that this Romney/Ryan ticket will somehow “save” the country while shutting out the the voices of actual change.

Watch the tribute video below, via C-SPAN: