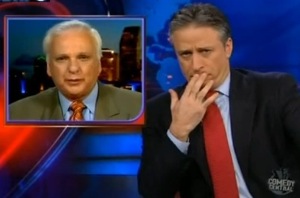 After receiving some relatively harsh criticism from Fox News analyst Bernie Goldberg earlier this week, Jon Stewart returned the favor. And how! In an epic retort that was equal parts comedy, reasoned argument, and song (with a dash of monocled flatulence for good measure), Stewart tore apart Goldberg’s critique. Jon’s rejoinder is best summed up “you can’t criticize me for not being ‘fair and balanced,’ that’s your slogan. Which by the way, you never follow.”

Some background is necessary here. Last week, Stewart highlighted perceived hypocrisy on Fox News, after juxtaposing clips of Fox News pundits criticizing irresponsible overgeneralizations with clips of what he felt were examples of Fox News pundits making the same irresponsible overgeneralizations. Bernie Goldberg was a primary example, and Stewart ended the bit by telling Goldberg and Fox News to “go f*ck yourself.”

On Monday, Goldberg replied in kind, and after agreeing that Jon Stewart was correct in his critique – that he was guilty as charged – Goldberg shot back at Stewart, asking him why he hadn’t treated liberal icons like Frank Rich in the same way he has treated more conservative guests. He also charged that if he didn’t treat everyone more fairly, he was “just a safe, Jay Leno with a much smaller audience.” Goldberg also said:

But if clearly you want to be a social commentator, more than just a comedian and if you want to be a good one, you better find some guts because even though you criticize liberals as well as conservatives, congratulations on that, when you had Frank Rich on your show, who generalizes all the time about conservatives and Republicans being bigots, you didn’t ask him a single tough question. You gave him a lap dance. You practically had your tongue down his throat.

Stewart replied in kind – and while it’s best to watch the must-see video below, here are some highlights of the 11-minute clip that will surely be added to the Daily Show Segment Hall of Fame. All of the following are quotes from the segment:

In a delightful turn, Stewart then took a page from Brian Williams and slow-jammed his response to Goldberg, where he outlined his varying political positions including support of gay marriage, pro-military and lactose intolerance. Then the song broke into full-fledged spiritual, in which Stewart gave the following rejoinder in full revival style:

Bernie I don’t have to satisfy your version of what fair satire should be. I’m not fair. I’m not balanced. You’re criticizing me for not living up to your tagline. And you dismiss any criticism as further evidence of how the rest of the media persecute you. You like to pretend, Bernie Goldberg, that the relentless conservative activism Fox News is the equivalent of the disorganized liberal influence you find on NBC, ABC and CBS. Fox News, you may be able to detect a liberal pathogen in their blood stream, however faint. But Fox News is such a crazed overreaction to that threat. You’re like an auto-immune disorder. I’m not saying that the virus doesn’t exist in some small quantity. But you’re producing way too many antibodies.

Stewart summed up by saying “as long as ‘fair and balanced’ is how you sell yourself, what I’m saying is ‘Go F*ck Yourself!'”