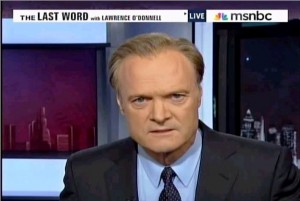 We’ve been closely following MSNBC host Lawrence O’Donnell‘s coverage of Donald Trump and the would-be Republican candidate (or not, if you’re inclined to agree with O’Donnell’s assessment of the situation) and we were keen on seeing what he’d have to say about Trump tonight in the wake of the White House’s presentation of Barack Obama‘s birth certificate. And O’Donnell did not disappoint.

Instead of going after Trump – a man to which he has devoted time week after week on his show, and one whom he accuses of doing or saying anything in his ongoing quest to quence his insatiable thirst for media attention – O’Donnell set his sights squarely on Trump’s employers at NBC, accusing the network of having effectively “created a monster.” O’Donnell pointed specifically to an anonymous NBC exec who told The New York Times that this is all “just Donald being Donald” (It’s a quote we at Mediaite also found… interesting, to say the least.)

O’Donnell has previously taken the network to task for, essentially, allowing Trump to bring the “birther” issue to the foreground of current political and cultural discussion when they know (again, if you happen to agree with O’Donnell) or at least have a sense that the man is not going to run for office. Earlier this month, he went so far as to call Trump NBC’s “greatest individual embarrassment.” In New Hampshire, Trump said he could not make an official announcement regarding hsi campaign plans until his NBC show, The Apprentice, finishes its season. O’Donnell pointed out that this is simply untrue – Trump can announce, today, whether or not he plans to run without forcing his network to have to supply equal airtime to other candidates. The issue is not the announcement, it’s whether Trump will file the legal documents necessary to become an actual, legal candidate – and only then would equal time claims come into play. Therefore, explained O’Donnell, Trump is hiding behind NBC, evidently with the network’s full cooperation.

Watch the full segment, via MSNBC: