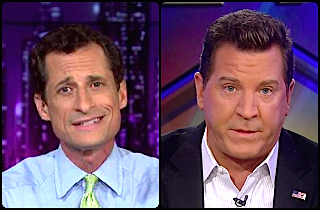 Earlier today we posted this video of Anthony Weiner explaining that Fox News is conservative and MSNBC is liberal, not exactly the most novel concept in the world. Since he was speaking on CNN’s Reliable Sources, he added jokingly that CNN simply reports the “God’s honest truth.”

But it was the idea that Fox leans right that caused The Five co-host Eric Bolling to reach out with his objections to Weiner on his preferred mode of communication, Twitter:

@anthonyweiner Fox is not "right" .. it's pretty fair and has plenty of lefties on here, they just happen to be relevant lefties, unlike you

Weiner replied with a “bring it on” message:

@ericbolling says the clown tweeting at me to feel relevant. Bring it on chickie.

And then they were off to the races:

@anthonyweiner have you been on with @DrDrew perhaps @DrPhil? More appropriate venues for you, no?

@ericbolling any of your viewers not gumming their lunch right now?

@anthonyweiner @Huma must be so proud of her man… @HillaryClinton too!! ;)

@ericbolling maybe you should get some help here. I hear you need 4 friends to finish a sentence.

@anthonyweiner just think how many more people saw your name today than any other day in your life.. thank me another time "Congressman"

@ericbolling says the clown who trolls me on twitter to feel relevant. thanks indeed. This ones for you champ #OMG

@anthonyweiner Dude..you lost your fight.. do me a favor before we go, … text us if you want a fair & balanced intv **NO SEFIES PLEASE**

@ericbolling lesson learned about fox talkers yet again, like all bullies, they fold easily when popped back. Class dismissed.

It doesn’t seem like Weiner will be joining Bolling on Cashin’ In anytime soon. But if he does, we will make sure to bring you the inevitable overlapping shout-fest right here.

Update — 3:00 p.m. ET: Bolling obviously did not like the idea of Weiner getting the last word:

@anthonyweiner Class may be dismissed for you.. I have a BIG show (TheFive) to put together.. Check it out some time.. might learn something

Watch the video of Weiner’s original comments below, via CNN: