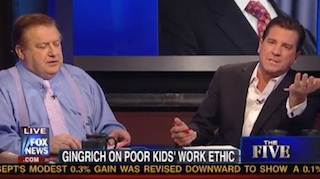 If, during the day today, you’ve gone on any liberal blog, or comedy site, or Reddit, or Tumblr, or Twitter, or, well, basically any part of the Internet that isn’t actively owned by the Republican Party, chances are good that you’ve seen the Fox Business Network clip of Eric Bolling and Dan Gainor accusing The Muppets of promoting a liberal agenda. It’s not surprising why the clip has had such legs. First off, it’s funny. I mean, The Muppets? Really? More importantly though, it seems to play into every single negative assumption people have about Fox News. It’s practically a pre-written SNL segment.

However, if Bolling didn’t like looking like a parody of himself, he didn’t show it a few hours later on The Five when he began complaining that the show had gone too long without attacking President Obama.

The moment came during a segment on Newt Gingrich’s plan to let young children in poor areas take menial jobs. As the hosts were debating the merits of the plan, Bolling cut in, getting in a hilarious argument with Bob Beckel:

BOLLING: My point is, guys, why are we doing our third segment on beating up Newt Gingrich or trashing Donald Trump? Where’s the segment on Obama-

BECKEL: You know, you’re in withdrawal. Eric, you know, there’s something called the Republican primary for the nomination and their isn’t one on the Democratic side.

BOLLING: I get it. But we’re 30 minutes into the show and I haven’t heard a word about how 48 million Americans-

BECKEL: Because you’re going through withdrawal. You’re like a heroin addict, is what your problem is.

This moment is similar to the moment from last August when Beckel and Greg Gutfeld jokingly admitted to pulling punches on Sarah Palin. For anyone who watches the show regularly, they’d understand what Bolling (especially in his new 11th Commandment-following ways) was attempting to get at. However, for anyone else, it seems mighty odd to see a Fox News host literally be counting the minutes since the show last did a “trash Obama” piece.

While this moment might not be as colorful as the Muppets segment, it’s possible that Fox News critics will find it even more damning.

And, if they don’t like that, they can also discuss the way Bolling closed the show in a Tim Tebow-emulating prayer. Seriously, look at Gutfeld’s expression in that picture. It’s amazing.

(Side note: In the clip, Gutfeld mentions The Wire. However, I believe he’s referring to Season Four and not Season Three. I correct him only because Season Four of The Wire is possibly the greatest single series of television ever produced and, if anyone reading this hasn’t watched it, you need to get on that right away)