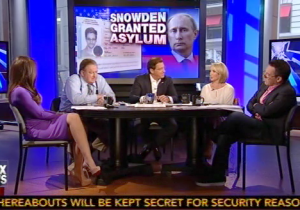 The Five today took on the news that NSA whistleblower Edward Snowden has been granted asylum in Russia and has left the Moscow airport. Kimberly Guilfoyle, Greg Gutfeld, and Dana Perino made fast and loose with snark directed at Snowden’s actions, while Eric Bolling did his best to put things in perspective and remind people that the real problem is the NSA, not the fantastical voyage of the man who exposed its secrets.

Bob Beckel suggested the Russians may be “using Snowden for other things,” while Bolling revealed Snowden’s father spoke to him before taping. While he still would like his son to come home, he also thinks that President Obama should “admit that some of the things the NSA were doing were an overreach.” Guilfoyle insisted this doesn’t mean Snowden was in any way justified for what he did.

“If you’re so noble and you’re doing the right thing and you want to expose the U.S. government, then why don’t you go about it in the right way? Go to the supervisor, go to the person above that supervisor, make your complaint or say you have a problem then!”

Gutfeld mocked up Snowden as a supposed “great hero” and wondered why neither he nor Greenwald have the capacity to “stand up to an actual villain like Putin” over Russia’s anti-gay laws. He and the others continued the Snowden-in-Russia bashing, while Bolling jumped in to tell his colleagues, “I am sure Russia wasn’t his first choice.” Guilfoyle still maintained, “There is no excuse for going to Russia.” Bolling shot back, “There’s really no excuse for what the NSA did as well.”