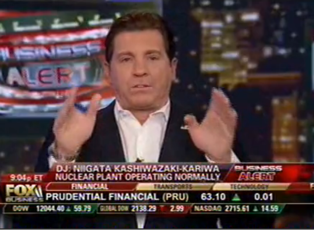 Just as Three Mile Island stunted the development of nuclear energy in America, and the Chernobyl disaster did so for much of the world, the current nuclear emergency in Fukushima, Japan is not making nuclear power look like too attractive an energy alternative at the moment. Not all have lost their hope in it, however: FBN’s Eric Bolling is sticking with it, arguing that now is the time to build more nuclear reactors in America.

“If a nuclear reactor survived this devastation,” Bolling argued on Follow the Money on Fox Business Friday, “that’s a pretty good real-world test that we should give nuclear energy more of a test.” He has a point, of course, except Fukushima’s nuclear reactor is barely keeping it together at the moment and new reports are declaring about 140,000 people to have been evacuated from their homes due to radiation fears and counting. Playing a clip from the infamous late ’70s film The China Syndrome, Bolling argued that the film was patently false propaganda (true) and that, compared to other energy sources, nuclear is rather safe.

“There has never been a death directly associated with radiation in the history of North American power generated from nuclear energy,” he argued, and, just to prove that every energy source comes with risks, he played a video of a wind turbine smacking a flying hawk out of the sky. “The point is everything comes with danger,” he concluded– a point he could have likely made more persuasively with footage of the BP oil spill than of a bird getting hit by a windmill, but point taken nonetheless. And, he concludes, America’s energy demand isn’t getting any smaller. What’s more, because the Three Mile Island incident nearly shut down the entirety of the nuclear industry in America, the United States never really gave the science of it a change. No one disagreed that the United States’ dependence on foreign oil needed to end, and, at the very least, nuclear plants would be a step in that direction. While this segment was shot yesterday when the situation had not yet escalated to today’s point of desperation, he stuck to his guns this morning on Twitter: 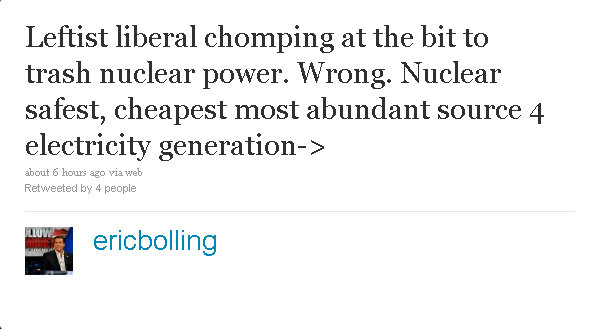 Bolling makes some shockingly persuasive points despite the backdrop of the Japanese disaster (images of said disaster played throughout most of the Follow the Money segment on Friday, silently defying his argument). While many cancer victims in the Three Mile Island area may beg to differ– and certainly people have died in nuclear accidents in the United States when the power was only accessible to the military— no nuclear plant accidents have caused deaths in North America. In fact, one of the deadliest nuclear accidents in American history, the Goiania Incident, was caused by an unassuming ball of cesium in an abandoned building. Power plants have yet to prove deadly. What’s more, the greatest of nuclear plant accidents, Chernobyl, is undeniably one of the most avoidable tragedies in human history. Run by a reckless government that invested in little to no safety measures, the Chernobyl Nuclear Power Plant was not only allowed to overheat when warning signs of disaster began, but was forced to generate even more energy once it began to overheat. Operators ignored the fragments of uranium– only visible had the reactor core been exposed– and refused to turn the plant off. There was nothing about Chernobyl that could not have been stopped. 25 years later, we certainly know better than the Soviets did in 1986.

But the optics are inescapable, the stakes are too high, and the worst case scenario is far too prominent in the news right now for it to be a wise choice to consider promoting nuclear energy at the moment. While it is true all sources of energy have their dangers, few contest that the worst disaster of any other kind cannot compare to the damage of a complete nuclear meltdown. Or perhaps Bolling has far more faith that the Japanese will be able to contain the damage than most people do– for a resolution to that, the world is still holding its breath.