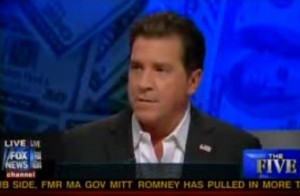 During a heated debate over supposed “scare tactics” over the debt ceiling standoff Wednesday, The Five‘s Eric Bolling got an attack of Giuliamnesia™, telling Fox colleague Bob Beckel that he didn’t remember any terrorist attacks on American soil between 2000 and 2008. Like the former Mayor of America, Bolling is forgetting, not only 9/11, but several other Bush-era domestic attacks like “shoe bomber” Richard Reid, the DC Sniper attacks, and the anthrax killings.

Bolling got a big laugh from Bob Beckel, and a sheepish grin from Dana Perino, when he said “I’m pretty sure President Bush never fear-mongered like this,” which prompted Perino’s tellingly specific defense that “He didn’t threaten not to pay Social Security.”

Beckel missed the chance to point out that Bush did more than just threaten Social Security by attempting (and failing) to privatize it, but he did remind the panel that “what he did was saying, if we didn’t go into Iraq, we were going to be subjected to weapons of mass destruction, which we still haven’t found.”

This prompted a frustrated reaction from Perino, who has “had it with liberals who bring that up all the time.”

Perino is right to point out that Democrats, at the time, voted for the authorization to use force, but she’s wrong to equate buying a pig in a poke with selling one.

Beckel asked, again, why the WMD were never found, to which Bolling replied, “Whether they did or didn’t, America was certainly safe between 2000 and 2008. I don’t remember any terrorist attacks on American soil during that period of time.”

Bolling’s whopper went unremarked upon by the rest of the panel, a weird coincidence when you recall that ABC News’ George Stephanopoulos similarly did not challenge Rudy Giuliani when he made the same assertion on Good Morning America.

UPDATE: The next day on The Five, Eric Bolling responded to the criticism of his comment with some fairly strong words. Watch that clip here.