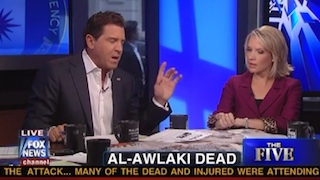 While others on his channel were giving the current administration credit for their recent spate of terrorist killin’, Eric Bolling wasn’t about to join into the Obama back-patting. Instead, he took a page from that last big terrorist death, and accused Obama of overshadowing the guy who really deserves credit; President Bush. Bolling claimed to be offended by the current President’s undeserved “victory lap,” while an incredulous Kimberly Guilfoyle pointed out that she didn’t remember seeing Obama do any running.

“Look, the issue I have is that Mr. Obama came out today during a podium appearance and said, ‘Look what we’ve done.’ I’m not so sure he should be taking all the credit for this. Y’know, Dana, George Bush – your administration – put a lot of the infrastructure in place that they’re using to capture and kill these bad guys and all of a sudden there’s a victory lap by the White House.”

It was not an opinion shared by many at the table but it wasn’t an exactly surprising one from Mr. Bolling. More surprising is that the only other person who didn’t seem too enthusiastic about the news was lone liberal Bob Beckel. Beckel took the Ron Paul route, pointing out that he didn’t love the idea of America executing people without a trial. However, when prompted by Dana Perino, he did admit that there may have been some kind of “presenting of evidence” done in private that we weren’t privy to.

All of that being said, Beckel did want to make it clear that, no matter what some of the conversation may have implied, liberals like killing terrorists just as much as the next guy.