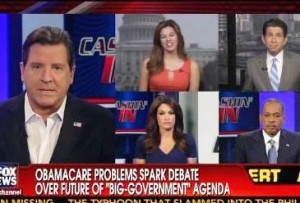 On Saturday’s Cashin’ In, Kimberly Guilfoyle contended to Eric Bolling that President Obama has been “the most destructive president we’ve had.” Juan Williams was floored by the assertion, and the three of them battled over just how “destructive” Obama’s really been to the American workforce and economy.

The main issue Bolling raised was whether the Obamacare rollout trainwreck is proof positive of the absolute collapse, or at least remission, of liberalism. Michelle Fields pointed out that people used to be so confident Obama would be “liberalism’s reviver and savior,” and now he’s just “digging its grave.” Guilfoyle contended Obama has “no political capital or goodwill left,” and it’s shown the American people what kind of sickness big government really brings.

Williams sighed and called the celebration premature, clashing with Jonathan Hoenig over whether Social Security and Medicare are big government issues the GOP should ever dare touch. When Guilfoyle contended that Obama’s “the most destructive president we’ve had,” Williams pointed to Wall Street profits and gas prices, asking “Who served this country in terms of economic recession?”

Bolling shot back that under Obama, the labor participation rate is at its lowest point since Jimmy Carter, “the other worst president ever.”

All five of them ended up clashing over the social safety net and leaving children hungry in the streets, before Bolling jumped in at the end to just clear the record that no one actually wants to see children go hungry.