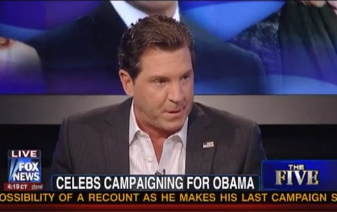 On Monday’s edition of Fox News’ The Five, the panel debated the Sarah Jessica Parker-starring Obama campaign ad which aired during Sunday evening’s MTV Movie Awards, as well as last week’s Anna Wintour-starring ad along the same lines. Surprisingly, conservative host Eric Bolling defended Sarah Jessica Parker from right-wing criticism, saying that “I like her. She’s fair, she’s balanced” and adding that “she can support Obama, who cares?”

Co-host Greg Gutfeld began the segment by mocking last night’s awards show, saying that “If MTV were a person, it would be a divorced dad getting an earring, trying to hit on his teenage daughter’s friend.”

“Hollywood is Obama’s volunteer PR army and personal ATM machine,” he added, after playing a clip of Parker’s campaign ad.

After the panel debated whether Wintour’s endorsement is a good thing for the Obama campaign, given her “elitist, remote” image, co-host Kimberly Guilfoyle said, “In defense of SJP, she’s a very nice lady, and she’s very generous.”

Co-host Bolling then interjected, “Not only is she nice, she’s politically astute. She’s fantastic, she’s fair, she’s balanced. She had a chance to take a shot at Sarah Palin once and she said ‘You know what, that’s not right.’ You may or may not like her politics, but don’t take shots at her. I like Sarah Jessica Parker. And okay, so she can support Obama, who cares?”