Surprise! Eric Bolling (Sort Of) Gets Liberal Guest To Endorse Some Forms Of Profiling 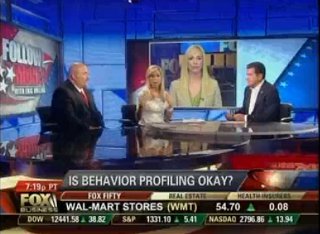 In the wake of a proposed bill to ban TSA patdowns in Texas failing to get off the ground, Eric Bolling revisited the airline security issue on Follow the Money. After the obligatory clip/interview with “Don’t touch my junk” guy John Tyner, Bolling held a panel discussion on the potential effectiveness of profiling – and even got a liberal guest to agree (with conditions) that some forms of profiling might be worth exploring.

Occidental College professor Caroline Heldman began her remarks by saying, “Obviously I’m against profiling,” but quickly added she’s also “very much against the groping.” And while Bolling’s argument was a bit simplified for our taste (the line “Why can’t the TSA just profile bad guys?” in particular), it seemed to work, because when the subject of behavioral profiling came up, Heldman called it “a great idea.” Bolling seized on this.

He asked Heldman if clothing is “behavioral.” Heldman replied, “Sure.” She came to regret this very quickly, because by this point, Bolling had pretty much gotten her to (accidentally) agree with him that people in turbans should be moved to a different line. Heldman, possibly with this running through her head, spent the rest of the segment trying to walk it back. She reminded Bolling, for example, that terrorists can come in all forms (something else we could have done without: Bolling downplaying this idea by noting the Oklahoma City bombing was 16 years ago, as if that made it entirely null and void as an example).

But the damage was done. Unwittingly or not, Heldman set herself up to look like she agreed with Bolling that Muslims should be profiled in airport security lines, and no amount of her saying “it’s not a balance between liberty and safety” was going to change it. Video below, via Fox Business.