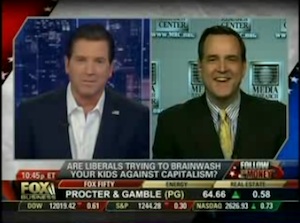 On Friday’s Follow The Money on Fox Business Network, Eric Bolling and his guest Media Research Center‘s Dan Gainor strongly criticized the environmental themes of the recently released Muppets film. “Let’s point this out,” Bolling exclaimed. “This evil muppet is titled Tex Richman!” “It’s amazing how far the left will go just to manipulate your kids, to convince them, give the anti-corporate message,” lambasted Gainor. ‘I mean this is a Muppet movie for goodness sakes! The only thing green on the screen should be Kermit!’

“I’ll put it out there: Is liberal Hollywood using class warfare to kind of brainwash our kids?” Bolling asked.

“Yeah absolutely, and they have been doing it for decades,” Gainor replied.

“They hate corporate America,” Gainor continued. “And so you’ll see all these movies attacking it, whether it was ‘Cars 2,’ which was another kids’ movie, the George Clooney movie ‘Syriana,’ ‘There Will Be Blood,’ all these movies attacking the oil industry, none of them reminding people what oil means for most people: fuel to light a hospital, heat your home, fuel an ambulance to get you to the hospital if you need that. And they don’t want to tell that story.”

Despite Bolling and Gainor’s repudiation of the environmental message of The Muppets, Kermit has always been pro-green as Jim Henson was a staunch advocate for wilderness protection, which is evident in works like Fraggle Rock and National Wildlife Federation ads, where Kermit’s nephew Robin told viewers to “make Earth Day everyday.” Most notably, one of Henson’s final Muppet productions, in fact, was a segment produced for an ABC 1990 Earth Day special with Kermit raising awareness about species extinction and saying that it was “up to people” “to fix the damage they’ve caused to the earth.”

Watch Bolling and Gainor criticize The Muppets below via FBN: