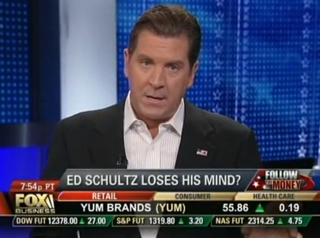 Tonight has not exactly been a pleasant night for Ed Schultz, who temporarily ended his career at MSNBC tonight with a heartfelt apology to Laura Ingraham for calling her a “slut” twice on the radio. But he didn’t have the last say on the scandal of the night– that went to fellow Schultz victim Eric Bolling, who discussed the comments with his panel and even offered to “help” Schultz if his lashing out was a product of “drinking or doing drugs.”

Bolling, who introduced Schultz as a “left winger from MS-LSD” on Follow the Money tonight, made no bones about his feelings towards the host of The Ed Show, accusing him of “not even trying to hide his overt sexist tendencies”– Schultz had accused Bolling of “not even trying to hide his racist subtext over a comment that President Obama had been “chugging 40s” instead of helping the tornado victims in Missouri– and hoping “his bosses take a hard look at the matter” (the show is pre-taped, so Bolling had not yet heard of the suspension).

The panel, consisting of Juan Williams, Monica Crowley, and, most comically, psychiatrist Dr. Keith Ablow, were all equally flabbergasted at the statements. “I don’t even understand how ‘slut’ fits into this,” Williams wondered, while Crowley lamented the lack of vocal women’s groups supporting Ingraham. Dr. Ablow, meanwhile, wondered whether “the guy is okay,” comparing this to “Mel Gibson about the Jews” and pleading to Schultz that, “if he’s drinking or doing drugs, he should come forward.”