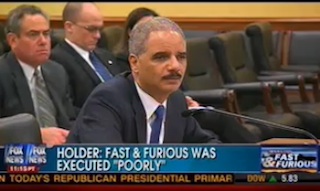 On Fox News’ America Live, Megyn Kelly reported that Attorney General Eric Holder was unable to hold back his emotions during his testimony on Capitol Hill Tuesday. Holder admitted that the program, which was linked to the shooting death of Border Patrol Agent Brian Terry, had been executed extremely poorly. “It was a bad attempt at trying to deal with a very pernicious problem, where guns are flowing from the United States to Mexico,” Holder divulged. “In its conception, in its execution, it was fundamentally flawed,” Holder said about Fast and Furious. “I understand what they were trying to do, but they were doing it extremely, extremely poorly… it’s bad law enforcement.”

RELATED: AG Eric Holder Chews Out GOP Rep: ‘Maybe This Is The Way You Do Things In Idaho Or Wherever You’re From’

“That was a fundamentally flawed program,” Holder continued. “I can agree with some of my harshest critics, there are legitimate issues that need to be explored with regard to the way “Operation Fast and Furious” was carried out. But one thing that has to be understood is once this was brought to my attention, I stopped it. I stopped it. In spite of what other Attorneys General might have done with briefings they got. When this Attorney General heard about these practices I said to them, ‘men and women of the United States Department of Justice, to the field, this ain’t going to be the way we conduct business. Stop it!”

Kelly invited Congressman Darrell Issa to respond to Holder’s testimony. “I asked for people to come before our committee,” Issa fumed. “Others have taken the Fifth. Others we are still trying to get. I told the Attorney General that it is contemptible and I will seek, if necessary, contempt of the House if we can’t get cooperation under the Constitution in our investigation.”