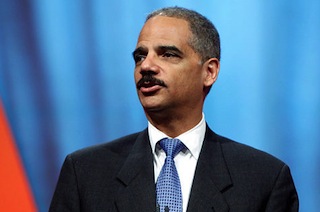 Attorney General Eric Holder is set to announce a change in policy regarding in mandatory sentences for low-level, non-violent drug offenses on Monday, with the aim of reducing the application of mandatory minimums.

“Too many Americans go to too many prisons for far too long and for no good law enforcement reason,” Holder plans to say, according to a copy of the remarks released earlier Monday. “We cannot simply prosecute or incarcerate our way to becoming a safer nation.”

Under the new guidelines, the Department of Justice will instruct local and state prosecutors to better tailor their charges so as not to trigger mandatory sentences, where there is discretion possible (some states induce mandatory sentences for any drug charge). Holder will also be calling for Congress to pass legislation granting judges greater freedom in sentencing.

The sentencing changes, also an attempt both to ease the burden of the overcrowded prison system, are part of a larger sweep of reforms that Holder intends to make the defining charge of the remainder of his term.

General Barry McAfree, former Drug Czar for Bill Clinton, sounded generally in favor of Holder’s reforms, arguing that mandatory minimums had potentially done more harm than the inequitable sentencing practicing they were meant to alleviate. “A lot of these mandatory minimums started because of disaffection on the part of the population with grossly varying sentences,” he told MSNBC. “One person with a similar crime would get ten years behind bars, the other person ninety days. Now I think they’ve worked to our disadvantage.”