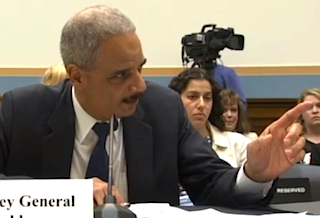 Attorney General Eric Holder got into a tense confrontation with Rep. Louie Gohmert (R-TX) during a his appearance before a House Judicial Committee oversight hearing Tuesday. When Gohmert raised the threat of holding the attorney general in contempt of Congress, Holder shot back, “You don’t want to go there, buddy.”

Gohmert was referencing the 2012 vote by the House of Representatives to hold Holder in contempt for refusing to turn over subpoenaed documents related to Operation Fast and Furious. Raising the specter of another such vote, Gohmert said, “I realize that contempt is not a big deal to our attorney general, but it is important that we have proper oversight.”

“Well, I’m just looking for evidence,” Gohmert replied. “And normally, we’re known by our fruits. And there have been no indication that it was a big deal because your department has still not been forthcoming in producing the documents that were the subject of the contempt.”

UPDATE (2pm ET): At the very end of Gohmert’s time, Holder got in one last dig at the congressman: “Good luck with your asparagus.”

It may have seemed like a non sequitur, but Holder’s remark was actually a call back to a comment Gohmert made during a hearing last may. “The attorney general will not cast aspersions on my asparagus,” Gohmert told Holder at the time, without any further explanation.

The best response to the strange debacle came from Stephen Colbert. “How dare you cast aspersions on that man’s asparagus?” Colbert demanded of Holder on his show. “What is next, sir? Libeling his lettuce? Questioning his quinoa? Arguing with his arugula? Repudiating his rutabaga? Vilifying his vinaigrette before drizzling it on his scandal salad?”