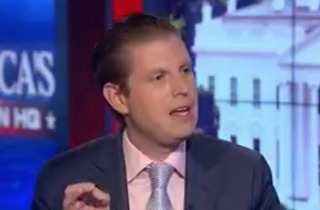 According to Donald Trump‘s son, Michael Bay‘s film about the attack on the American consulate in Benghazi should be mandatory viewing for anyone voting in the general election.

Eric Trump appeared opposite Martha MacCallum on America’s Newsroom on Fox News today, where she asked for his reaction to an upcoming Hillary Clinton speech where she is expected to blast the senior Trump on foreign policy and his presidential qualifications. Eric Trump said he “cringed” at the notion that Clinton could lecture his father on foreign policy, and he defaulted to the infamous attacks when he told MacCallum about how he spent his Memorial Day weekend.

“My wife and I watched 13 Hours this weekend, and literally, I was livid after watching this movie,” Trump said. “I think in order to vote in this next election, you should have to watch that movie. She left these guys on a rooftop in the middle of Benghazi getting shot at, having mortars drop on their head because she wouldn’t pick up a phone call in the middle of the night.”

Bay has lamented in the past about how politics “got in the way” of his film, and even though the movie doesn’t explore the political fallout, Trump has used it as a weapon against Clinton. The younger Trump went on to say that Clinton’s remarks about his father were “truly, truly disgusting,” and that the mogul will be an “amazing” commander-in-chief.