Erick Erickson Surprises Himself By Defending Romney: Comments Were ‘Dumb,’ But Many Will Agree With Him
Video

Erick Erickson Surprises Himself By Defending Romney: Comments Were ‘Dumb,’ But Many Will Agree With Him 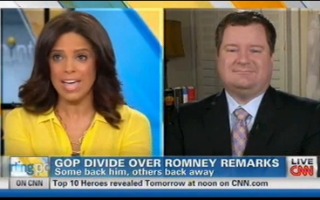 RedState editor in chief and CNN contributor Erick Erickson appeared on Starting Point Wednesday, expressing his own surprise at defending Mitt Romney. “It’s just not my natural state,” he joked.

I will put it to you this way: the problem for Mitt Romney is he was speaking off the cuff, at what he thought was an off-record dinner for donors. And he conflated two different things and everyone’s merged them together, and in his head I don’t think he was merging them together. And he’s going to have to explain that, admittedly.

There is a reality that 47% of Americans will look for Obama, 47 will vote for Mitt Romney. He went on then to characterize the people he thought would vote for Barack Obama and saying well they don’t pay income taxes, they’re dependent on the government, they’re victims. Well, the 47% number also equates to people who don’t pay income taxes. Now, I don’t think he was actually talking about all those people. But I don’t think it matters. And I don’t think it matters because every Gallup poll that’s ever come out on this question, they’ve asked it for awhile, most of those people don’t think that Mitt Romney would be talking about them. They don’t consider themselves victims. So you’re going to have to explain to these people that Mitt Romney really does think you’re a victim and I think that’s a hard sell. The problem, though, for Mitt Romney is that his campaign hasn’t had a policy on this issue. And now he’s going to have to pivot and try to come up with a policy.

Panelist Will Cain felt Erickson’s analysis was merely political, adding that Romney conflated three groups — those that don’t pay taxes, those that are somehow dependent upon the government and those that would vote for Obama — rather than present a cohesive group that adds up to 47 percent. But what really bother him, Cain added, is that Romney was “just flat wrong.”

Host Soledad O’Brien felt that, even if those hearing now of Romney’s speech don’t necessarily look at themselves as the “victims” he’s talking about, his comments remain offensive, particularly his remark about people feeling “entitled” to food.

Erickson responded by noting that there are a lot of people out there who don’t pay income taxes and who receive government benefits who would agree with Romney on this issue. And what Romney has to do now, he added, is own the comment and not back down from it. Now, if you’ll excuse him, he has a panther to deal with.