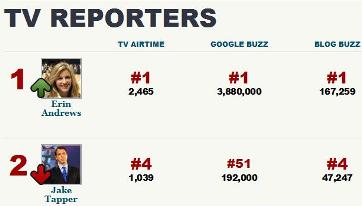 The new Mediaite Power Grid rankings for TV reporters are up, and ABC’s Jake Tapper is out of the top spot.

But the bigger story is who replaced him – ESPN’s Erin Andrews. Despite not appearing on ESPN at all this week, Andrews skyrocketed to #1 in every category (except Twitter followers, where she doesn’t have an account). Instead, Andrews took first because last week, she was the story.

For all of last week, Andrews’ name on the tips of people’s tongues on the Web, in print and on TV after she was illegally filmed naked in her hotel room. The storylines continued during the week, from ESPN banning news organizations to implications Andrews may have in some way been asking for it.

And now she’s #1 on the Mediaite Power Grid. As Deadspin (which was one of the first outlets to drive the story) put it sarcastically today: “I Guess This Is A Silver Lining“.

But does it make sense? There was heated debate here at Mediaite HQ, so we’ll present both sides. But I think it does.

Earlier last week, Andrews’ rise on the Grid began and landed her at #24. Her Google and Blog Buzz number was big, but her TV mentions were still low. Then, the cable news, and broadcast networks, picked up the story. She was the most talked about reporter last week, and today, her TV Mention number is #1 as well.

The Power Grid does not claim to be a list of the best reporters. Instead, this is an “influence index.” And for whatever reason, Andrews now has influence, even if it’s fleeting as the news cycle finds the next human interest story to focus on.

We asked a reporter for his take: “It absolutely does make sense. Just because she hasn’t been on TV doesn’t mean she can’t be the most powerful. Your metric reflects that she’s the most talked about reporter in all mediums.”

We’ve just started Week 4 of Mediaite.com, so we don’t have too much historical precedence here. But it is conceivable that the fluidity of the rankings allows for these temporary spikes, and it accurately reflects the present time. What if we existed in February when Rick Santelli unleashed his “rant” – shouldn’t he have jumped up the rankings? Or when Susan Roesgen became a conservative punchline after the April tea parties – wouldn’t in make sense for her “influence” to rise?

I think the fact that Erin Andrews is currently ranked #1 makes the system look questionable. She is without question NOT the top reporter in the country. So basically what we are saying is that you can get to the top of the Power Grid by being filmed naked, intended or not. Point is the result is a certain level of notoriety, which has nothing to do with her skills as a reporter. So Andrews clocking in at number one suggests that the next reporter who wants to kick it up a notch just needs to aim for notoriety, reporting be damned.

Of course we [Mediaite] are benefiting from it also! Because now everyone is talking about how she is number one. And there is, I suppose, also the argument to be made that in the last week, due to this unfortunate instance, Erin Andrews had become a household name. I’d certainly never heard of her before. So perhaps at this, her moment of power, she can leverage that notoriety and get a better job! Which will maybe lengthen her moment of power, which will make her more powerful. The head spins! I guess I just disproved my own argument: Power Grid wag dog.