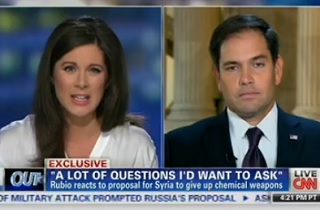 The one-sided and unserious nature of the media’s Syria coverage has come to a head today with Russia’s and Syria’s desperate leap at Secretary of State John Kerry‘s almost joking offer of a way to avoid a U.S. military strike on Syria. Media from the left, right, and center have relentlessly sold Syria as Iraq 2: Electric Boogaloo, but now that President Obama‘s threat of a strike may have actually worked far beyond anyone’s expectations, they’re all scrambling to avoid the possibility that they were all wrong.

On Monday night’s Out Front, CNN’s Erin Burnett even went so far as to ask Senator Marco Rubio (R-FL) if the prospect of Syria’s total surrender of chemical weapons, in the face of U.S. military action, is “the President’s way of backing away from a strike?”

She also wondered “Does this make the President look unsure or ambivalent, or worse, weak?”

Burnett is certainly not alone in trying to tee up this potential huge victory for the U.S., and with it a complete vindication of the President’s handling of the Syrian chemical weapons attack. Even on MSNBC, the sundry liberal hosts who have been peddling the Iraq comparison to oppose the President have been characterizing the (Accidental?)  Kerry Doctrine as a “way out” for the President, or as an “opportunity” that has simply fallen, like manna, from Heaven. ‘

This is a bit like calling a royal flush a “way out” of a poker game. If Assad actually does turn over all of his chemical weapons to the United Nations, that result will exceed the wildest dreams of even the most deluded “Obot.” Assad and Russian President Vladimir Putin are so spooked by the possibility of a U.S. intervention, however unlikely, that they leaped at Kerry’s idea like it was the last bag of Funyuns at a 4/20 party, because even though the President sought Congress’ approval for a strike, he conspicuously reserved the authority to carry out a strike without it.

Now that the President has allowed time for everyone to consider Assad’s acceptance of what no one could have even hoped for, the media has to save face, but Burnett’s gambit is brazen even by those standards. Heaven help me, I even found myself in agreement with most of Rubio’s answer.

Asked “Does this make the President look unsure or ambivalent, or worse, weak?” Rubio replied “I don’t want to say anything that undermines the u.s.’s position, globally, on national security.”

I don’t agree with Marco Rubio about much, including his opposition to authorizing the Syria strike, but unlike so many in the media and Congress, at least he’s taking this seriously.