Erin Burnett On Libya Gaffe: Herman Cain Is So Tired ‘He’s Not Able To Function Anymore’ 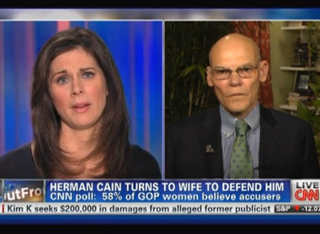 Herman Cain‘s complete mind lapse on Libya today seems to have raised more eyebrows than even his sexual harassment scandal, but at least one news anchor is willing to give him the benefit of the doubt. On her program today, Erin Burnett offered that she, for one, did not believe he knew nothing about Libya, but that “his mind is so busy with what’s going on and he’s so exhausted…that he’s not able to function anymore.”

Burnett was discussing the matter with campaign veteran James Carville, and noted that she did not think Cain knew as much about Libya as he seemed to give away in the clip (nothing), but merely that the campaign “is taking a real toll on him.” While Carville agreed that campaigns are “utterly exhausting, you have no idea what it’s like,” he couldn’t help but note that it was a “painful” moment that “made Rick Perry look like Henry Kissinger.”

Burnett made the point, however, that “this was different from the Perry thing” in that Cain’s “mind was just not there.” Carville seemed to disagree, adding that he did “feel sorry for him,” but that he hadn’t seen Cain prove that he knew anything about Libya in any other venue. “He’s demonstrated no depth in this particular area at all,” he argued, concluding that Cain “had no business getting into the race for President, has no business running for President,” as it was “an endeavor not suited to his skill set.”