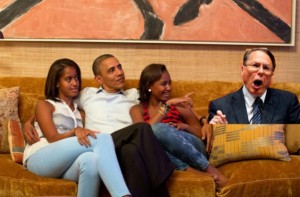 The National Rifle Association is receiving the attention it desperately craves for launching an attack ad in which they slam President Obama for sending his kids to a school with armed police officers, while… proposing funding for armed police officers in any school that wants them? While the ad is nonsensical and false, most of the outrage has centered on the NRA’s decision to involve the President’s daughters, Sasha and Malia. On Wednesday night’s OutFront, however, CNN’s Erin Burnett seemed to suggest that President Obama’s release of a family photo made the First Daughters fair game for political attacks.

In a panel discussion with contributors Reihan Salam and Roland Martin, Burnett asked if the ad was “out of line,” and even the conservative Salam refused to defend it, although he did say the ad, while “crazy” and “counter-productive,” “makes sense according to a different strategy.”

Roland Martin condemned the ad, and said the NRA were “punks” for putting the ad out, and “weak and cowardly” for pulling the ad. Several news outlets reported that the ad had been pulled, but in fact, the traffic to the site had crashed the page briefly, and it was  never pulled down.

Then, Burnett asked, “What about the fact that politicians use their kids, when they want to, politically, all the time?”

Burnett referenced the famous photo of a young Chelsea Clinton holding hands with her parents on the way to Marine One, and above Roland’s protests, added “Hold on, let me just finish. And this time, before the DNC, when the White House released a picture of the President with his two daughters, snuggling on the couch, there it is, watching Michelle Obama.”

She concluded, “Look, they use their children for political purposes when they want to, too.”

Roland defended the Chelsea photo, but even acknowledging that it delivered some specific political benefit, what, exactly, is Burnett suggesting about the photo of the President and his daughters? That he would normally not be caught dead sharing a couch with them, or watching his wife deliver an important speech? Are those not his daughters? If there’s no artifice, then assigning “political purposes”to that photo’s release is like saying the President is exploiting his five million-vote margin of victory for “political purposes.” No, he actually won the election, and he actually is a loving father.

This is yet another example of what passes for “objectivity” in TV journalism, the idea that there are two sides to every story, and no way of determining the truth.